Hermes Quarterly information report at the end of September 2014 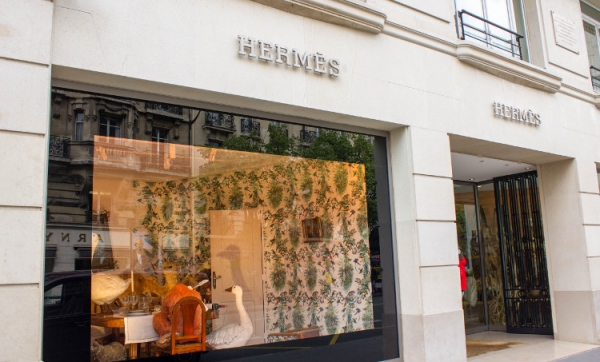 Quarterly information report at the end of September 2014 12% growth in sales at constant exchange rates over the first nine months of 2014 Paris, 6 November 2014

At the end of September, the group's consolidated revenue totalled €2 897.4 million, a 12% rise at constant exchange rates. After adjusting for the negative impact of currencies, growth is 9%.

In the third quarter, growth remained strong (+11% at cnstant exchange rates), particularly in the group'sstores.
Sales by region at the end of September (at comparable exchange rate so unless otherwise indicated) The opening of China's first Maison Hermès in Shanghai was one of the major events of the quarter. This new three-storey store in a fully renovated historic building is part of the group's long-term strategy of qualitative development of its distribution network.
At the end of September 2014, sales were growing in all regions: • Asia (excluding Japan) (+15%) posted a good performance despite recent events in Hongkong and the slowdown in China's luxury market,• Japan (+13%) was buoyant and confirmed the positive trend observed in the first half-year, • America (+14%) maintained its dynamism following a strong third quarter, • Europe (+7%) made solid advances in a difficult economic climate.
Sales by sector at the end of September (at comparable exchange rates unless otherwise indicated) Growth in Leather Goods and Saddlery (+15%) was supported by the increased production capacities of the two new sites in Isère and Charente. Plans to build two new workshops in Franche-Comté are underway.

The dynamism in Ready-to-wear and Accessories sales (+13%) results notably from the success of fashion accessories and the latest ready-to-wear collections.

The Silk and Textiles business line (+9%) continues to expand its collections with new formats and exceptional materials. A new online showroom and store for Hermès silk lamaisondescarres.com was launched in September.

Watches (-10%) continue to be penalized by wholesale sales in a market that remains challenging, particularly in Asia (excluding Japan).
Other Hermès sectors (+15%) continue to grow. Jewellery, which presented its new haute bijouterie collection at the 24 Faubourg Saint Honoré store in Paris, made a significant contribution to this dynamic with the success of the latest collections in gold.Important developments At the end of September, currency fluctuations represented a negative impact of €77 million on revenue.

On 2 September 2014 and led by the President of Paris Commercial Court, the companies Hermès International (Hermès) and Louis Vuitton Moët Hennessy (LVMH) reached a settlement agreement in which LVMH undertook to distribute all the Hermès shares held by the LVMH Group to its shareholders, it being understood that Christian Dior company distribute these Hermès shares to its own shareholders. The operation was detailed in a press release circulated by LVMH on 3 November 2014.

Over the first nine months of the year, Hermès International redeemed 23,214 shares for €5.8 million,outside the movements made in the framework of the liquidity contract

For the full year, the group is retaining its mid-term objective of revenue growth at constant rates of around 10%. Operating margin could be slightly less than the all-time high achieved in 2013 (32.4%) due to the
negative impact of currencies.

Hermès will continue its long-term strategy based on creativity, maintaining control over its know-how,expanding its distribution network, strengthening its production capacity and protecting its supply sources.

In 2014, our company will focus on the themes of metamorphosis and precious materials becoming works ofart in the skilled hands of artisans. Above all it is our company's unwavering determination to reinvent itself and push the limits of excellence that is our hallmark.

More in this category: « Search engine optimisation Firms: Aid For Businessmen’s On the web LVMH launches second edition of the LVMH Prize for Young Fashion Designers »
back to top