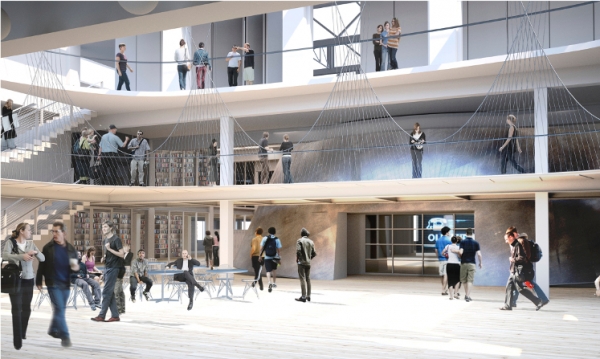 After a year of construction, Pacific Northwest College of Art (PNCA) has opened the new Arlene and Harold Schnitzer Center for Art and Design, the flagship of PNCA's campus on Portland's North Park Blocks. With a $34 million transformation of Portland's historic post office, the College is positioned at the heart of the city's burgeoning creative corridor.

PNCA is pleased to announce that the $15 million target of its Creativity Works Here capital campaign was met in January. The campaign was launched in 2012 with a lead gift of $5 million from the Harold and Arlene Schnitzer CARE Foundation.

The opening of the Arlene and Harold Schnitzer Center for Art and Design ushers in a new era of art and design education in the Pacific Northwest. Located at 511 NW Broadway, the new state-of-the-art facility will draw talented students from across the nation and beyond and serve as a cultural hub for Portland, with galleries and gathering places, a black box theater, and public programs.

"Our new campus is a dynamic platform for 21st century art and design education," says PNCA President Tom Manley. "Creativity is the world's most powerful, sustainable resource. To meet the world's fierce challenges, we need creative thinking, now more than ever. PNCA fosters that thinking in hundreds of young people every day."

Manley acknowledged the many people who worked in "Portland-style" collaboration to make the building a reality, including the Schnitzer family and the campaign donors, Portland Mayor Charlie Hales, and the Portland Development Commission. And Manley recognized the offices of U.S. Senator Ron Wyden, U.S. Representative Suzanne Bonamici, and U.S. Representative Earl Blumenauer for their support over the last seven years in helping PNCA successfully navigate the federal transfer of the building. "Most importantly, this project would have been impossible without the extraordinary leadership and vision of our Board of Governors," says Manley.

Under the design leadership of Brad Cloepfil of Allied Works Architecture, the project team took care to preserve key historical features, while creating a public interface with beautiful spaces for exhibitions, lectures and events, an elegant library, and an object-studies collection space. Gerding Edlen served as project manager and Howard S. Wright as general contractor.

"Today represents a bold step into the future for this institution, the neighborhood, and Portland's creative economy," says Mayor Hales. "This project exemplifies the kind of collaborative innovation for which Portland is known."

PNCA's new campus continues a story that started in 1892, when a group of Portland artists came together to channel the city's innovative spirit into the creation of the Portland Art Association. In 1909 it launched the first museum art school on the West Coast, which became the Pacific Northwest College of Art in 1981.

"This is a major step forward for arts and design in Oregon," said U.S. Rep. Suzanne Bonamici, whose district is home to PNCA. "The beautifully renovated facility will expand PNCA's ability to educate creative students who will be the innovators and entrepreneurs of the future." Bonamici is a member of the House Education and Workforce Committee and the co-founder of the Congressional STEAM (Science, Technology, Art and Math) caucus, which advocates for integrating arts and design into STEM learning.

U.S. Rep. Earl Blumenauer, who in collaboration with the National Park Service and National Trust for Historic Preservation helped PNCA secure the post office, noted, "It's a big win for the region as we celebrate this revitalization of this historic federal asset and spur development of the creative economy in Portland and beyond."

PNCA's expansion is expected to bring new vitality to the North Park Blocks as well as the Old Town and Chinatown neighborhoods. The 1919 six-story building is located at the west end of the Broadway Bridge and was originally designed by Lewis P. Hobart. In 1979, it was added to the National Register of Historic Places.

More in this category: « International options to students interested in medical or veterinary careers Join the best graduates »
back to top