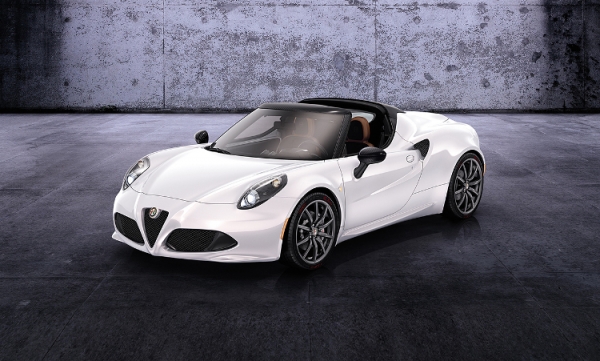 Alfa Romeo returns to the Paris Motor Show with a high-scenic-impact stand showcasing the sporty soul of the brand, made of dream Spider models, high-performance versions and precious heritage specimens - all alternating to powerfully stress the unique nature of the brand among automobile manufacturers worldwide.

For over a century, Alfa Romeos have been made for those who expect cars to go beyond the concept of 'useful means of transport' and cross over into 'sheer excitement' territory. That's why the exhibition area in Paris unfolds like a winding road, the ideal scenario for experiencing the emotions that only Alfa Romeo cars can offer, thanks to their agility, power and safety.

To confirm the common thread that has always tied the cars of yesteryear to those currently in production, the new Giulietta Sprint, at its world debut, and a precious Giulietta Sprint of 1954 are both displayed on the stand: an ideal baton is passed between two agile, powerful cars, both at their best when tackling breathtaking successions of straights and corners.

A closer look at the new Giulietta Sprint reveals unique details enhancing its sporty look: from the oversized exhaust tailpipes to the new, 5-hole Sprint 17" wheels, from the sports rear bumper to the carbon-coloured interior finishes and glossy anthracite exterior finishes, all the way to the new fabric and Alcantara seats with red stitching and Sprint logo on the headrests. The new version features the brand-new 150 HP, 1.4 MultiAir Turbo Petrol engine, ensuring a top speed of 210 km/h and powering from 0 to 100 km/h in 8.2 seconds, while keeping fuel consumption and emissions low: 5.6 l/100km and 129 g/km CO2, respectively, in the combined cycle.

The Giulietta Sprint on show at Paris features an Alfa Red bodywork and is equipped with the fast-responding 150 HP, 2.0 JTDm Turbodiesel engine.

Also in the spotlight is the new MiTo Junior, the brilliant entry-level model designed to make the Alfa Romeo world of grit, agility and sheer fun accessible for younger buyers. The same characteristics that made the "baby" GT 1300 Junior of 1966 a unique, real sports car, featuring all the key assets of higher capacity, more powerful models. This model inspired today's MiTo Junior, on display at the Paris show in an Anthracite Grey livery and equipped with an 85 HP, 1.3 Turbodiesel JTDm engine. One of the second-generation MultiJet engines, the 1.3 JTDm version only produces 90 g/km CO2 emissions in the mixed cycle.

Another show-stealer is the Alfa Romeo 4C Spider preview model in its exclusive Triple Coat Glossy White livery, in smart contrast to the black floor of the stand; a convertible evolution of the multiple-award-winning coupé, this preview version is the outcome of painstaking stylistic research aimed at selecting some specific features (distinctive elements and aesthetic treatments) for the standard production scheduled to start early in 2015.

Next to it is the coupé version of the Alfa Romeo 4C in its Triple Coat Competizione Red livery - the brand's modern icon that expresses the essence of a sports car by combining awe-inspiring style and excellent performance.

The Paris show visitors will also be able to take a close look at the high-performance 'Quadrifoglio Verde' versions of the Giulietta and the MiTo, with their essential style, compact and powerful engines, perfect weight-to-power ratio and Alfa Romeo technology designed to enhance driving pleasure. Both these cars are a tribute to the legendary history of the 'Quadrifoglio Verde', the symbol that has identified the highest-performance vehicles made by Alfa Romeo since 1923: not only cars competing on racetracks worldwide, but also a few special production versions.

The same, distinctive personality is shared by the MiTo Quadrifoglio Verde, the most dynamic soul of the compact sports model, equipped with the brand-new 1.4 MultiAir Turbo Petrol engine - combined with the state-of-the-art, 6-speed twin dry clutch Alfa TCT transmission - delivering a maximum power of 170 HP at 5,500 rpm and a maximum torque of 230 Nm at 2,500 rpm (and up to 250 Nm at 2,500 rpm in Sport mode). The key assets of this engine are its exceptional weight-to-power ratio (6.7 kg/HP) - traditionally one of the critical factors behind Alfa Romeo's success - and segment-leading specific power (124 HP/litre).

On display in Paris is also an exclusive 'Quadrifoglio Verde Launch Edition' - featuring a matt Magnesium Grey livery and available in a limited edition of just 999 numbered items - and a MiTo Quadrifoglio Verde with an Alfa Red livery and equipped with the brand new 170 HP, 1.4 Turbo Petrol MultiAir engine combined with the latest-generation 6-speed twin dry clutch Alfa TCT transmission.

Finally, visitors will be able to enjoy a breathtaking "drive experience" thanks to the large LED screen set up on the stand, and become familiar with the products offered by FGA Capital - a finance company specialising in the automotive sector - presented also through available printed material. The company is active in all the major European markets - in France with FC France and FL Auto - with the single goal of supporting the sales of all Fiat Chrysler Automobiles Group brands by offering innovative financial products with high-added-value services, targeted at the dealership network as well as private customers and companies.

More in this category: « The ‘Quadrifoglio Verde’ is back on Giulietta and MiTo Mopar® designs exclusive accessories and services for the new Fiat 500X »
back to top