Production Of The Mclaren P1™ Comes To An End 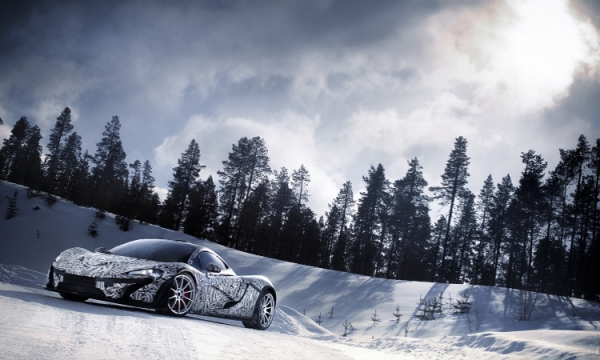 The final chapter in the production of the McLaren P1™ has now been written as the 375th and final example was completed, bringing the curtain down on the most technologically advanced and dynamically accomplished supercar ever made.

From launch, the groundbreaking model was designed with one key goal: to be the best drivers’ car on road and track. Since headlining the debut motor show appearance for McLaren Automotive at the 2012 Paris Motor Show as a design study, the first model in the McLaren Ultimate Series has been writing headlines, breaking lap times and thrilling owners the world over.

Production commenced during the summer of 2013, with all cars sold prior to the first car being delivered, and the first car – finished with Ice Silver paintwork and extensive levels of visual carbon fibre – rolled off the production line during the 50th anniversary celebrations of McLaren in September 2013. A fitting tribute to Bruce McLaren; the man whose dream it was to produce the ultimate drivers’ car. Following this, each and every car was custom-built to the exacting specifications of its owner, in consultation with the team at McLaren Special Operations (MSO), ensuring that no two cars are the same. Running at full capacity, the bespoke Ultimate Series production line within the McLaren Production Centre (MPC) finished one car per day, with each individual model taking 17 days to complete on average.

The final production example of the McLaren P1™ is finished extensively in stunning pearlescent orange, achieved through a unique tinting process. The colour echoes the shade of the 64th and final McLaren F1 roadcar, chassis #075, which went on to inspire Volcano Orange, available today across the McLaren Automotive range. It features subtle styling elements in raw carbon fibre weave, with the finish only visible externally on the splitter, diffuser and the aerodynamic blades along the lower body, while the super-lightweight wheels are finished in silver. A blend of refinement and purposeful intent is evident inside the cabin with bespoke styling touches by the team at McLaren Special Operations (MSO) including gloss black detailing for the switchgear, instrument bezels and air conditioning vents. The lightweight carbon fibre-shelled racing seats include further MSO craftsmanship, with the final McLaren F1 roadcar again the inspiration for the final design. Upholstered in black and orange Alcantara®, the contrasting details are carried across to the stitching on the steering wheel.

Mike Flewitt, Chief Executive Officer at McLaren Automotive commented: ‘The McLaren P1™ has achieved more than we ever expected of it since it was first previewed little over three years ago, both as a new generation of supercar, and in enhancing the McLaren brand globally.

‘As the direct ancestor to the fabled McLaren F1 – and the first in a new breed of hybrid-powered supercars – it had big shoes to fill, and it has more than succeeded. It has established itself as a true contender, proving to be more than a worthy rival on both road and track against long established rivals. It has done a fantastic job of becoming the halo product for the McLaren Automotive brand as we have grown the business into the three tiered, profitable outfit that we are today.’

THE McLAREN P1™: THE ULTIMATE SUPERCAR
Combining a highly efficient petrol engine and lightweight electric motor, the McLaren P1™ was the first of a new breed of supercars, debuting in production form at the 2013 Geneva Motor Show. The strictly limited production supercar was the first model in the exclusive Ultimate Series, which crowns the recently announced three McLaren model tiers, above the Super Series and the Sports Series. It rewrote the rulebook and challenged what people believed was possible, as the iconic McLaren F1 had done 20 years previously.

The McLaren P1™ introduced a number of new technologies to the supercar world, using techniques and developments from the world of motorsport to enhance performance. Through the pioneering use of weight-saving technologies and materials, including the extensive application of carbon fibre, the McLaren P1™ has a dry weight of just 1,450kg. The carbon fibre MonoCage chassis – which incorporates the roof and lower structures, roof snorkel air intake, battery and power electronics housing – weighs just 90kg making it one of the lightest carbon fibre full-body structures used in any road car to date. The aerodynamic design, coupled with the groundbreaking RaceActive Chassis Control suspension system, offers a stiffer and more track-focused set up at the press of a button. ‘Race’ mode stiffens the suspension by 300 percent, pulls the car 50mm lower to produce ground effect aerodynamics, and extends the large active rear wing by 300mm. The result is 600kg of downforce at well below its maximum speeds (257km/h / 161mph) , which is considerably higher than most other high performance supercars, and more in line with the levels of downforce generated by a GT3 racing car. This downforce improves cornering ability, especially in high speed corners.

The powertrain comprises a 3.8-litre twin turbo V8 petrol engine with a lightweight, highly powerful electric motor which, together, produces 916PS (903bhp) at 7,300rpm, and 900Nm (664lb ft) of torque. Through the seamless integration of the 179PS (176bhp) electric motor, 130Nm (96lb ft) of torque is available immediately, providing ‘torque fill’ to offset any turbo lag as a result of the larger turbos fitted to the combustion engine. Through this innovative approach, the McLaren P1™ is propelled from a standstill to 100km/h (62mph) in 2.8 seconds, with 200km/h reached in 6.8 seconds and 300km/h achieved in just 16.5 seconds – a full five seconds quicker than the legendary McLaren F1. Top speed is limited to 350km/h (217 mph). This performance is kept under control through a bespoke braking system, developed specifically for the McLaren P1™, using materials previously used on the Ariane space programme. Formula 1™ technology and expertise ensure optimal performance in every area, providing progressive and predictable braking in the most extreme of conditions, such as high speed track work.

More in this category: « Q By Aston Martin Creates A Unique Vanquish Collection Armoured cars - vehicles which are unique in every way »
back to top