Born to race on every ground 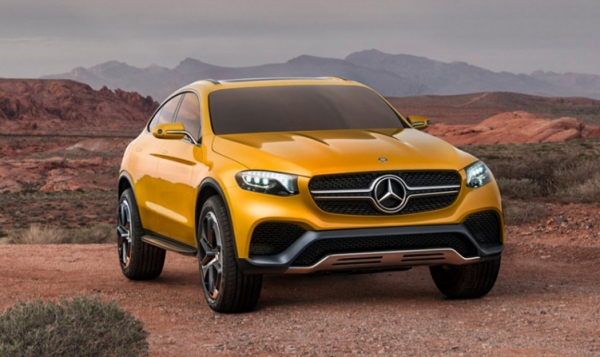 In a flowing transition, Mercedes-Benz lands the next coup: the Concept GLC Coupé is a near-production-standard study that carries the successful GLE Coupé formula over into a more compact segment. The dynamically expressive show car combines typical stylistic features of a coupé with the sensually pure design idiom of coming SUV generations.

This emotively appealing fusion is further enriched with details that are strong in character. A twin-blade radiator grille, powerdomes on the bonnet and a four-pipe exhaust system form an aesthetic contrast to the harmonious, almost organic main body section.

On the other hand, elements from the rugged off-road world, such as enormous 21-inch tyres, front and rear underbody protection, increased ground clearance and side running boards, are indicative of the off-road performance potential of the Concept GLC Coupé.

The same successful blend of the multifunctional SUV and the emotively appealing coupé world of Mercedes-Benz that was so enthusiastically welcomed with the GLE Coupé is now repeated with the Concept GLC Coupé. However, the near-production-standard show car inhabits a more compact segment, as demonstrated by the external length of 4.73 metres and the 2.83-metre wheelbase. These two dimensions, together with the striking and muscular main body section, elongated greenhouse and large 21-inch wheels, provide an ideal basis for the typical, almost dramatic proportions of the sportily youthful coupé generation with the characteristic off-road touch.

At the front, a short, crisp overhang with upright radiator grille and twin-blade louvre so characteristic of sporty Mercedes-Benz models give a first indication of the sporty philosophy behind the Concept GLC Coupé. The credo “Born to race on every ground” is confirmed by the powerdomes on the bonnet, the sweeping lines of the A-wing below the radiator grille, the large side air intakes and the visually dominant underbody protection. Like all the trim elements on the concept vehicle, this typical SUV feature radiates in silver shadow to form an attractive counterpoint to the solar-beam paintwork and the all-round claddings in matt gun metal magno paintwork.

The perfection with which the intrinsically contrary design worlds of the coupé and the SUV have been brought into harmony with each other is revealed in particular by a side view of the just under 1.60-metre-high Concept GLC Coupé with the typical, elongated roof line of a sports coupé. Like the integrated roof rails and fully recessed door handles, the squat greenhouse with its frameless side windows blends perfectly into the vehicle’s flanks to additionally underscore the coupé-like character.
Indication of the more prominent SUV genes is given by sill extensions reminiscent of the side running boards on a classic SUV. Flush with the outside edge of the body, wide 21-inch wheels with large, heavily profiled tyres combine with the relatively high ground clearance to endorse the sportily dynamic off-road ambitions of the Concept GLC Coupé.

More in this category: « Drive emotionally, rationally Infiniti Q 50 An elegant performance »
back to top