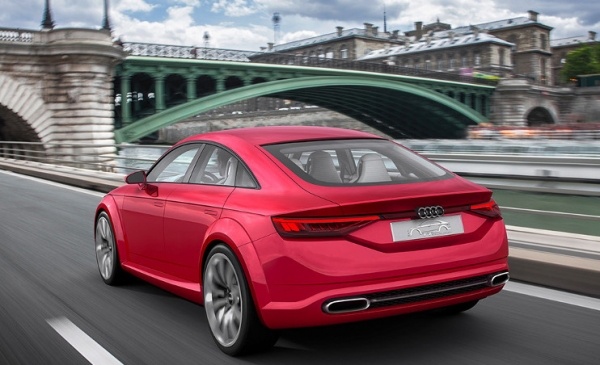 A speedy sports car with four seats and five doors – Audi presented the TT Sportback concept at the Paris Motor Show. The exterior of the show car invokes the design idiom of the classic TT*, developing it into a new, elongated sculpture. It is driven by a high-powered 2.0 TFSI engine that delivers 294 kW (400 hp).

“With the TT, Audi created one of the automotive design icons of the last 20 years,” said Prof. Dr. Ulrich Hackenberg, Audi Board Member for Technical Development, at the premiere of the show car in Paris. “In the years since, we have designed our sporty and elegant fivedoor Audi A5 Sportback* and Audi A7 Sportback*. In our Audi TT Sportback concept show car, we are now fusing both concepts to form a new member of a potential TT family.”

The Audi TT Sportback concept captivates with the power of 294 kW (400 hp) that flows through a seven-speed S tronic to the quattro permanent all wheel drive. The sprint from 0 to 100 km/h (62.1 mph) takes just 3.9 seconds. The sophisticated suspension and the low center of gravity ensure dynamic handling, and the body integrates a number of lightweight aluminum components. A laser spot that complements the LED high beam is featured in each of the headlights – this innovation from Audi significantly boosts safety when driving in the dark.

The Audi virtual cockpit dominates the elegantly designed interior of the show car, with the 12.3 inch screen replacing the conventional instruments and the MMI monitor. The screen provides top-quality graphics and enables the driver to choose between multiple display levels. In the MMI terminal, the rotary push-button features a touchpad that is used to enter characters and gestures as with a smartphone. The operation of the climate control has been relocated to the air vents.

Featuring Mars red paintwork, the body is a statement of powerful elegance: High-precision lines border athletically domed surfaces, and a flat greenhouse is positioned on a powerful body. The design makes use of the Audi TT’s formal idiom to develop a new sporty and elongated sculpture that is highly taut.

The distinctive horizontal lines at the front end of the new Audi TT Sportback concept reinforce the broad and sporty look. Bearing the quattro badge on its lower edge, the Singleframe grille is flatter and wider than on the two door coupe and features a honeycomb grille insert with a resplendent dark aluminum look.

The lateral borders of the Singleframe are continued across the hood as swage lines, giving it a sporty contour. Typically for Audi, the design forms a coherent whole, with all the lines and surfaces of the show car being linked to one another in a logical manner.

The front of the Audi TT Sportback concept has another characteristic feature in the form of the large, striking air inlets. Framed by pronounced edges, the air inlets have the look of individual structures and feature honeycomb inserts that fill their interior. A third, flat inlet underneath the Singleframe connects them to each other. The blade that gives the Singleframe structure sharpens the look of the show car whilst boosting the aerodynamics.

Another typical TT design feature are the newly designed headlights with separators that demonstrate a unique daytime running light signature. On the Audi TT Sportback concept, the high-beam spot is provided by laser technology – in each headlight, a module comprising four powerful diodes generates a beam of light that illuminates several hundred meters. The laser spot, which is activated at 60 km/h (37.3 mph) and above, supplements the LED high beam. For the driver, this is a significant boost to visibility and safety; a camera is used to detect and blank out other road users.

The lighting concept is rounded out by the indicator with a dynamized display that is also used in the LED rear lights. It comprises a series of individual diodes that light up one after the other from the inside to the outside, indicating the direction selected by the driver.

The side view of the four-seater show car is a particularly striking indication of the close relationship between it and the production TT. The Audi TT Sportback concept sits powerfully on the road and features short overhangs. The wide semicircles of the wheel arches, each of which protrudes by 3 centimeters (1.2 in), have a superimposed look. The front semicircle defines the edge of the hood, which runs as a sharp tornado line across the doors and to the rear end.

The trim of the side sill, which connects the wheel arches to one another, also has a broad and sporty appearance. In classic sports car style, the exterior mirrors and their angular housings are positioned on the door top shoulders. The right side part houses the circular filler cap, another classic TT icon.

The strong shoulders of the powerful vehicle body support a low greenhouse that is elongated towards the rear. This is in keeping with the Sportback line as implemented by Audi in its A5 and A7 model series. The flat C pillar flows elegantly into the shoulder, and the rear has a compact and sleek look. The highly rounded corners of the rear window are a homage to the original TT.

The rear of the Audi TT Sportback concept is also focused and sculptural, with five horizontal lines emphasizing its width. The one-piece rear lights – which also include vertical separators inspired by the R18 – form independent structures. These are linked to one another by the handle edge of the luggage compartment, which constitutes a powerfully contoured continuous trim. The surface that bears the number plate is located in the shadow of the spoiler lip. The two large elliptical tailpipes of the exhaust system are embedded in the diffuser and linked by a trim.

More in this category: « Bugatti has just eight Veyrons left to sell Porsche at the Los Angeles Auto Show with Three New Models »
back to top