What is a Nixie Tube Clock? 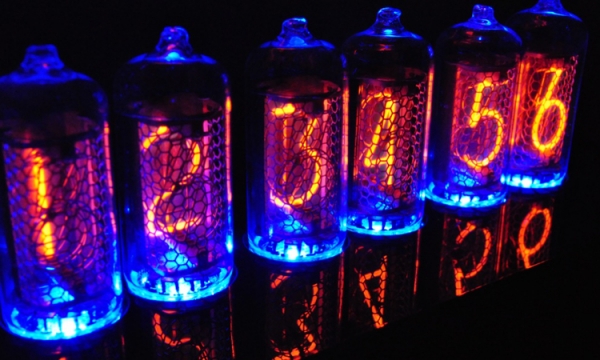 The Vintage Nixie tube clock is a decorative and very cool clock made using vintage components. What is a Nixie tube, you may ask yourself? Why not ask us instead? Nixie is generally believed to be an acronym for “Numeric Indicator eXperimental No. 1” and a Nixie tube is a device that displays numbers or other information.

For obvious reasons, the tubes that we use display numbers, any number you like between 0 and 9. In the days before LED and LCD displays, Nixie tubes were the most successful of several devices invented for the purpose.

That’s all very well, you may say, but how does a Nixie tube work? Okay, it’s time for some science. Let’s look inside a Nixie tube. Not literally of course, there are some dangerous gases in there so this is definitely a mental exploration, not a physical one. If you are really itching to see inside one, there are some videos online of people who have done just that. If you are really itching, you should seek medical help.

The Nixie tube is sealed, at low pressure, with gas inside. The numbers, each known as a cathode, are arranged for minimal visual obstruction, in a line. A mesh, known as the anode, surrounds them and when enough of a voltage is applied between them, positive ions and negative electrons are produced and current flows. The ions head for the negative cathode, the electrons head for the positive anode. It all get’s rather frantic inside a Nixie tube and some of the ions hit the cathode at such force that they dislodge some atoms, in a process known as “sputtering”, which subsequently crash into some electrons. In all the excitement, they glow – wouldn’t we all? This glowing business happens a very short distance from the actual numbers in a Nixie tube, which accounts for the very fine, dark line between the number and the glow. This is called the Aston Dark Space and only exists for you to mention it at dinner parties and social gatherings, as a way of fooling other people into thinking that you’re actually a lot cleverer than you are.

More in this category: « Swimming Pool Pump Facts Mind Your Dishwasher Air Gap »
back to top