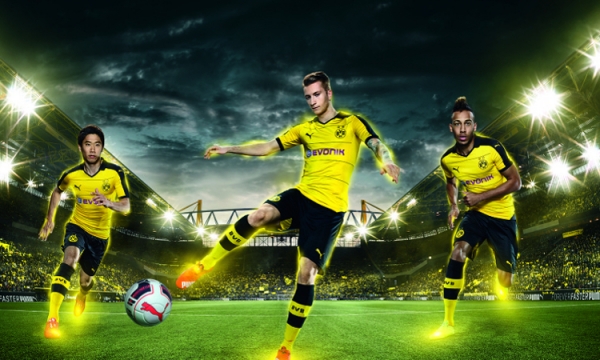 PUMA and Borussia Dortmund have today launched the new home kit for the 2015/16 season through a documentary video, which shows the importance of the shirt to both the players and the fans. Alongside some of the club’s first team players including PUMA star Marco Reus, fans can take on an interactive role and become part of the video through a Facebook app ‘My Personal Clip’,

which allows fans to upload their photo and create their very own version of the BVB home shirt film.
The new Home shirt combines the long-standing tradition of the club with a refreshingly new look. Featuring black, horizontally placed pin stripes, the mostly yellow shirt strikes a lot attention. Black inserts along the sleeves and the v-neck collar complement the overall look of the new home kit. Inside the shirt, fans and players can find the rules of the ‘BVB Leistungsversprechen’, which is a traditional club vow promising to always strive to the maximum of performance.

Made with high-quality polyester fabrics, the new home shirt is extremely breathable and provides optimum heat transfer when performing on pitch. On each side of the shirt below the armpits, mesh inserts featuring PUMA’s dryCELL technology help to transport heat and moist towards the outside.

Dortmund star striker Marco Reus said, “With pre-season training starting again, excitement for the new season is really building up. I really look forward to stepping again onto the pitch at SIGNAL IDUNA PARK, seeing all those black-yellow fans. The new shirt is great, and I like the subtle design with the stripes across the chest. There’s no doubt we will enjoy wearing this new kit throughout the 2015/16 season.”

More in this category: « Cole Haan Announces the Launch of Sun and Optical Eyewear Holiday Campaign 2015 »
back to top