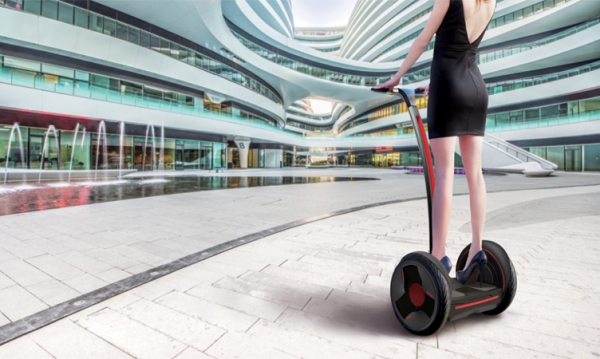 Ninebot is an amazing transportation tool. You drive and control it with your body's balance, just lean forward and backward. The Ninebot senses the rider's posture and remains balanced.

In addition, you can connect it to your smartphone via Bluetooth; enjoy remote control and intelligent diagnosis of any issues. The Ninebot-E, with no operation bar, weighs only 23.5Kg and can be equipped with a 670Wh high capacity battery, which extends its mileage capability to 30-45Km.

Your car's companion
Ninebot's operation bar can be easily removed. The Ninebot's frame weighs only 20Kg. The entire unit can easily be put into the trunk of most cars allowing you to take your Ninebot just about anywhere.

No traffic jams
The Ninebot is an excellent choice for 1-10 Km short-distance travel. It offers a maximum speed of 20Km/h as well as great shock absorption. The Ninebot's 16-inch Michelin tires ensure a rider can smoothly pass over most speedbumps and bunkers. In addition, the electric cost of 1 Km is only 1 cent. However, the most significant advantage of the Ninebot is that a rider will reach their destination quickly, while others waste time in a traffic jam.

Elegance and quality
The Ninebot's remote key features bone china and a silver texture. It's both sleek and elegant and comes with its own storage box. Its four buttons allow the rider to manage all its functions. Each Ninebot ships with 2 keys to ensure the rider always has a spare.

Fun and easy
The Ninedroid App is now available in Apple's App Store and Android's Marketplace. It features a comprehensive dashboard, a remote control function, record sharing, online diagnosis and service assistance and allows for customization of your Ninebot. Ninedroid makes your Ninebot more fun and easier to use.

Reinforce packing
Ninebot's packing passed the test of savage transportation. It withstands freely fall down or being thrown down at the height of 1.5m, with different angles, ending with no internal breakings. Packing is also a part that we care.
Main Frace packing size:
L620×W440×H470
Operation bar packing size:
L1140×W140×H95

More in this category: « Just a Wheel Your favorite washing machine »
back to top