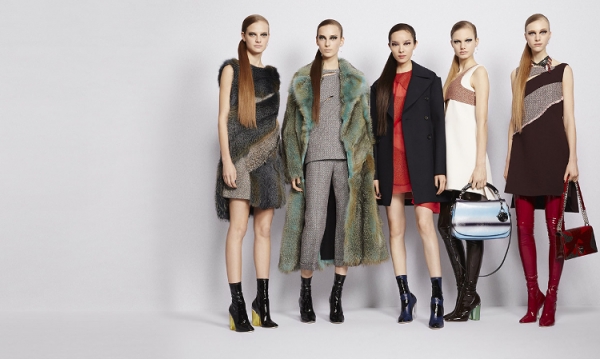 A central theme of the ready to wear collection for autumn-winter 2015-16 shown on March the abstracted animal prints designed by Raf Simons take their inspiration from those Christian Dior used on his own creations.

Zebra-striped dresses and jackets, flecked coats, mottled accessoires. The veritable leitmotiv of the Dior ready-to-wear collection for autumn-winter 2015-16, motifs of animal inspiration designed by Raf Simons revisit what has been one of the House’s emblematic codes since that very first fashion show on 12 February 1947 : the bestiary. It’s said that it was Mitzah Bricard, Christian Dior’s muse, who was the inspiration behind this.

The epitome of extreme elegance, she was never seen without the leopard-print chiffon scarf forever tied around her wrist. It was the signifier of a unique, feminine and almost feline style that would prove so seductive to the couturier. From his first fashion show, he peppered his collections with references to the animal world : the “Jungle ” print of 1947, the “Bestiaire ” print of 1950, and, from collection to collection, panther and zebra, as total looks or small touches. Previously reserved for sportswear, these animal motifs, reappropriated by Christian Dior, became the emblem of sensual femininity. And with a new appropriation all his own, Raf Simons has now looked to the House’s iconic bestiary. Woven as quasi-psychedelic catsuits, evoked by patches and fabric combining, the animalistic motifs are produced in pop colors and abstract graphics. “Animality and new ways of working fur and leather become key; none are literal, but rather the inventing of a new species,” explains Raf Simons.